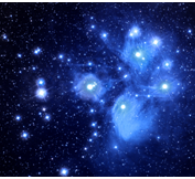 At the time of the Winter Solstice of December 2012 the Sun will be moving into a part of the Milky Way “Galaxy known as the “Photon Band” along with Alcyone, which is the main star of the Pleiades.  A lot of discussion of what this actually means has occurred although no one really knows for sure what will happen.  One thing we do know is that we will move from the Age of Pisces into the Age of Aquarius, considered by many to be the “Golden Age”.

Rev. Anna May, the founder of this system states that “in this ‘New Age’, the focus will be on the spirituality and expression of individuality of every unique living creature on the planet.  During this change things will be quite erratic because the friction between the ‘old age’ thinkers and the ‘new age’ thinkers will increase.  2012 will not see a sudden change but it will see acceleration in these changes.  Because these changes are brought on by an astrological event, we will all be subject to the experience of a change an the energy vibration of the planet as a whole, as well as the vibration of our own energy bodies and also our physical bodies.  As the vibration of the planet rises our basal vibrational frequency will need to rise accordingly.  As this happens, outmoded beliefs, thoughts of limitations and boundaries, negative emotions such as anger and jealousy will suddenly have to be changed to the higher vibrations and released as necessary.”

There are 7 attunements in this system that help you to prepare for the coming changes of 2012 and beyond.  They gradually increase the vibrational frequencies of your entire body.  The Pleiadians, who have links with the Lemurians have come to assist us with these changes.  During and after these attunements you may see that old beliefs and feelings are being released.  You may also see more creativity, patience, compassion and love.  A Grounding Meditation is provided to help you work with the energies.