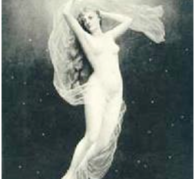 Aradia is one of the most important Goddesses in Italian Witchcraft, also known as Sregheria.  Mythology says that Aradia was sent to Earth by her mother, Diana, the Great Goddess of the Witches and faeries so she could teach Witchcraft to humanity and bring the revival of the ancient pagan religion.  She is considered to be a feminine “Avatar” who brought freedom to the oppressed classes.  Her story was passed from generation to generation.  Aradia not only taught of the old religion but also preached the love of freedom.  She also brought hope to the peasants and increased their self-esteem, putting them in harmony with nature through seasonal rites and rituals of the Full Moon.  Aradia is a symbol for the witches of today, helping with transformation and the uniting of heaven, earth, moon and universe.

A history of Aradia is included in the manual.  She can help with the following: