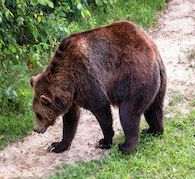 According to the founder of Bear Reiki “Bear is one that gives insight, brings in new energies, is loving and protective…Bear is a ‘totem’ or power animal for many who are mystics as well as shamans and seers.  Bear is believed to be the one who helps in introspection in Native American tribes…this energy, I have found to be ‘cohesive’, or one that is a good catalyst for other energies, as well as able to work on its own…”

The bear, as a totem animal, symbolizes many positive qualities including:

Bear can help us to go within for answers we seek when looking for strength and wisdom.

Several types of bears are discussed in the manual as follows:

You should understand the basics of Reiki and visualization to use this system.  It can be used in the same way as regular Reiki, on its own or in combination with other healing systems.  You will be able to visualize a particular kind of bear or use one of the Bear ‘symbols’ included in the attunement.

You will learn to work with two Bear Constellations for healing and meditation:

You may already have a Bear Totem or receive one during the attunement.  You can also meditate afterwards and ask to receive a Guide Bear or Celestial Bear.