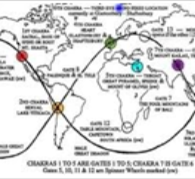 A long time ago before the ancient wisdom of the pagan and indigenous peoples were largely wiped off the map, people KNEW that the Earth was a living being.  Their survival was much more intimately connected with the flow of the seasons, the weather, and the cycles of the Earth.

Many of us tend to be overbalanced in our upper chakras.  But it’s the lower chakras, the feet, the toes and the Earth Star chakra that we need to tap into the Earth’s energy.

This attunement is a series of three empowerments, to be done in the following order:
•    SACRED EARTH CHAKRAS
•    THE SPINNER WHEELS AND SACRED CENTRES
•    THE RAINBOW SERPENT AND THE PLUMED SERPENT

THE SPINNER WHEELS AND SACRED CENTRES
These are the major sacred site areas, which generate the four alchemical forces symbolized by fire, air, water and earth.  The spinner wheels are vortices for the four elements.  They are called spinner wheels because the Earth energies emanate from them in either a spinning clockwise or anticlockwise motion.

THE RAINBOW SERPENT AND THE PLUMED SERPENT

The two dragon paths are the primary arteries of the living Earth, circulating abundant life energies and other vital qualities worldwide.  On a flat map, they form an infinity symbol, while on the sphere of the Earth, they are great circles intersecting each other at Bali and Lake Titicaca.  These energy arteries are known as ley lines, song lines, or dragon paths.

The Rainbow Serpent is a yin-feminine Earth current, which originates in Australia, at the world solar plexus chakra and then encircles the globe, passing through Mt. Kailas, Sergiev Posad-Moscow, Glastonbury-Shaftesbury and Lake Titicaca.  The Plumed Serpent is yang-male and originates from the world Gemini center in southern Mexico.  It then travels to Mt. Shasta, Mt. Fuji, Bali, and Lake Titicaca, as it moves around the world.

Through meditation and ritual it is possible to stimulate the flow of Earth energies in either direction along these great ley arteries. Activating group kundalini at each of Gaia’s chakras via these weavings will help to resonate humanity’s Groupmind with the intense awakening of these Great Serpents of Gaia’s kundalini.

There are three attunements associated with The Rainbow Serpent and The Plumed Serpent:
•    Harmony
•    Purification
•    Immortality