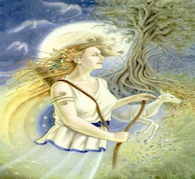 Artemis’ association with the natural world, and the wilderness, symbolizes her own untamed spirit. One of the most independent of the Goddesses, she roamed the forests in her role as huntress. The Greek goddess Artemis was famous for her hunting skills, for the sharp focus of her attention and her unerring aim. She is a protector of children and animals and is often associated with the moon, especially the crescent or “new” moon. She is sometimes called “light one” or “bright one”.  Artemis as “Goddess of Light” had the divine duty of illuminating the darkness. Artemis was often depicted carrying a candle or torch, lighting the way for others, leading them through territories yet uncharted.