The Goddess of Creation has been revered in all cultures.  Legend claims this sacred energy first entered the Earth Plane and took form on the ancient continent of Lemuria.  Many believe the Hawaiian Islands to be the remnants of this land.  There are three Hawaiian Goddesses you will be attuned to in this system. 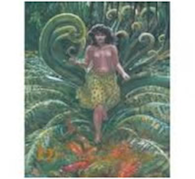 Goddess Haumea is considered to be the Earth Mother Goddess.  According to Hawaiian legend, she embodies the mystical Makalei tree, an abundant
source of Hawaiian food supply.  It is said that Haumea gave birth from different parts of her body, Pele the Volcano Goddess as a flame from her mouth, and Hi’iaka the healer as an egg from the extension of her right palm.

Goddess Haumea acts as Divine Midwife to many human mothers.  Haumea could transform herself into a young woman again when she grew old.
She symbolizes our ability to transcend physical age and remain young in spirit, and reminds us to care for the wild places. 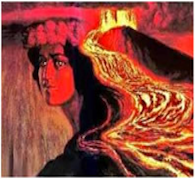 Volcano Goddess Pele lives on the island of Hawaii.  She has been honored as the Spirit of Fire, Lighting and Dance.  She is an Earth Goddess,
creating new land with every outpouring of lava from the volcano.  Pele guides her devotees to greater wisdom.  She is the keeper of emotions
and I always willing to share her “knowing” and lessons of transmutation to help us rebuild the landscapes of our lives. 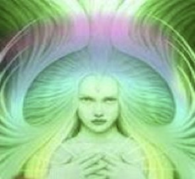 Goddess Hi’iaka is an expert Hula dancer, healer, guardian and Water Goddess.  She warns fishermen of dangerous storms at sea, appearing in the form
of a small rainbow.  Her psychic visions allow her to be an adept in all forms of Magick.  She is also associated with many plants.