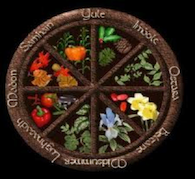 The Pagan calendar is based on the Celtic ‘Wheel of the Year’.  It is closely attuned to the natural rhythms and cycles of nature and the passing seasons.  The eight Sabbats relate to the passing seasons, each having a special significance.

The two Equinoxes are the points when both daylight and darkness are of equal length, occurring in spring as the Vernal or Spring Equinox, and the Autumn Equinox six months later.  These two events divide the Pagan calendar into two equal halves.

Exactly halfway between the equinoxes are the two points on the Earth’s path as it travels around the Sun that mark the Solstices.  At the Summer Solstice, daylight hours are at their longest, while darkness is at its shortest at the Winter Solstice.

These four points are known as the ‘Lesser Sabbats’ because they mark the transition of one season to the next as the Earth travels her path around the Sun.  Each season is at its peak at the point exactly halfway between each of the Lesser Sabbats.  These are ‘Days of Power’ called the ‘Greater Sabbats’.  Each Sabbat is marked by a festival with its own celebratory traditions that complete full circle of the Wheel of the Year.

In this series you will be attuned to and be able to rekindle the spirit of the eight Sabbats to use in meditation, spellwork and healing: