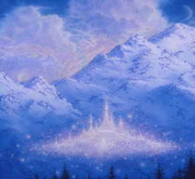 Adama is the High Priest in the sacred Lemurian city of light called Telos, beneath Mount Shasta, California.  He is head of the Lemurian Council of Light, and an ambassador and diplomat for Galactic contacts with our Star Brothers and Sisters on behalf of humanity within and on the surface of the globe.

Adama and his Lemurian team work with many members of various galactic and interplanetary beings on the creation and maintenance of the crystalline grid around our planet.  He is a Blue Ray ascended master, a master of Love and Compassion who assists humanity with the ascension project.  He embodies the “Heart of Lemuria”, the heart of love and compassion and the heart of the Divine Mother and the return of Christ consciousness to this planet.

In a channeling through the founder of this system, Gaby Solina Grill-MItterhofer, Adama spoke to her about the healing symbol Luranis Telos.  He told her that at this present time the energy of Lady Gaia and of people has increased very much and that the transition into the 5th dimension is now decided and approved in the Kingdom of light.  He was authorized to anchor the healing symbol Luranis as well as information about its use.  This rainbow energy is a code that opens the DNA for the New Age, bringing transformation of your entire body.  It is a symbol of healing, conversion, transformation and changing times for all levels of the human body and the Earth.

During this activation Adam takes you to the City of Light TELOS, where a ceremony of your initiation will be completed.  The healing symbol LURANIS with its pure rainbow energy from the areas of EL SHADDAI will be anchored in your third and fifth chakras by Adama.  If your soul lets it, it will bring healing on all levels, activate your DNA for the 5th dimension so that your transformation can begin.  You will also receive the Luranis healing symbol, activated by intention to send healing to each sick being and creature.