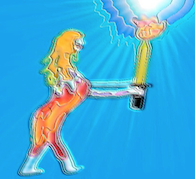 Brighid’s Flaming Sword Empowerment connects you to Goddess energies and the power of protection, cleansing and purification.  Brighid is a very powerful Celtic Goddess who has been compared by some as the equivalent to Archangel Michael in female form in protection.  While she is a Celtic Goddess of the Fae, she is also connected to the elements of both fire and water – sun and moon.  Patron Goddess of poets, she brings inspiration, great healing and definitely protection and purification!  You will connect quickly to Brighid and the power of her flaming sword for empowerment that gives you strength, courage and protection.

After your attunement to Brighid’s Flaming Sword, Goddess Brighid stands with a double handed sword of flame as she guards you, surrounding you with an energy field of protection.  As she swings her sword, it cuts away and burns negative energy, transmuting it to golden light.  She holds he power of the sun in her right and the moon in her left hand.

Whenever you need protection, you can always call upon the Goddess Brighid.  She is especially protective of women.  A triple Goddess – Maiden, Mother, Crone, she is also a Saint.  Fairies are drawn to Brighid and are always around those that work with her energies.

Brighid’s Flaming Sword cuts away negativity and purifies your sacred space.  This golden sword of flame is used with two hands for a solid grip that allows it to swing with force.  It is a broadsword design for strength and courage.   Brighid encourages women to stand your ground, always be strong and courageous, and to stand firmly in your power.  Her energies encourage independence and empowerment to rise above all trials.

A symbol is included in this system to help you to connect to the energies of Brighid’s Flaming Sword.