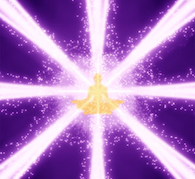 The Karmic Illness Flush will remove deeply repressed memories and health issues that relate to one’s experiences in one’s current and past lives so that these repressions can clear and prevent manifestation of genetic and biological illnesses within one’s current bodies.

A flush of the etheric bodies will take place to allow the release and healing of any karmically induced conditions and or barriers.  Any dysfunctions, physical, mental or emotional issues that originate from past life traumas, deaths, injuries, illnesses or violence will be cleansed and healed.  Memories of illnesses, traumas or conditions will be cleared to alleviate any symptoms which are manifesting in the current incarnation.

A new energy will come in allowing one to access the educative spiritual purpose of any karmic limitations so that one can access the lessons towards growth, wisdom and perfection.  Negative thinking and patterns will be released and healed and positive thinking and acting will be enhanced.  As the subconscious is cleared this allows one to think differently and react in more positive ways in daily life rather than being held back by karmic triggers.

The Karmic Illness Flush will prevent negative karmic actions from manifesting in form of problems or illnesses and allow positive actions in the form of success, happiness and health to manifest.  This will allow one to engage in positive actions as to prevent sickness from occurring again in the future.  The energy will purify and clear the negative karmic imprints that one has created in the mind.  As a result one will have greater mindfulness and awareness of all the actions of the body, speech and mind so that one does not carry out any actions that are harmful to the self or others.

The energy of this system will allow one to develop the unlimited potential within as part of one’s Divine heritage.