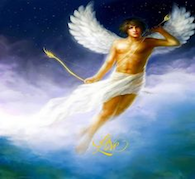 Eros Empowerment is for all men and women who desire love, passion and desire in their lives and relationships, and for those of you who are single and wish to be in a relationship with the love of your life.

Eros means sexual passion, lust, arousal, gratification and fulfillment in Greek Mythology.  The origin of the work came from the mythical God Eros.  Even in ancient times, his quality of love was thought to be spiritual as well as physical, and was generally believed to be the deity who caused the love of beauty, healing, freedom and many other things including love between people.  Eros was the son of Aphrodite.  He is known as the God of Erotic and Romantic Love, Passion and Desire.  In Roman Mythology, Eros was known as cupid and his mother was known as Venus.  The ancient Romans often depicted Cupid as their winged child or baby who carried a bow and quiver full of arrows.  Cupid was generally viewed in a good light because of the happiness he brought to couples both mortal and immortal