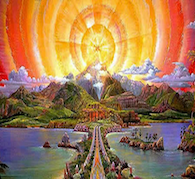 Amaru Meru, as one of the teachers of Lemuria was delegated to take the Sacred Scrolls of scientific and spiritual knowledge into his possession along with the enormous golden disk of the Sun to guard them and sustain the focus of the illumination flame at the time when Lemuria was about to be destroyed by the gigantic tidal waves. He took the knowledge with him to the mountainous area of a newly formed lake is what is now South America. Here he would guard and sustain the focus of the illumination flame. One translation of “Amaru” means “King of the Sun”, with “Muru” meaning “Queen of the Sun.”

Benefits of Amaru Meru Initiation and Meditation:
Cleans and purifies our energy bodies
Helps to raise our Fire Serpent/Kundalini
Increases our manifestation power
Increases our consciousness into higher consciousness
Helps to activate our third eye chakra
Builds a bridge between us and the Higher Dimensions of the Universe
And many other spiritual benefits