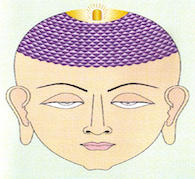 Head Chakra Flushes works with the “classic” Shakta Tantra system of chakras associated with Yoga and Hindu practice, and the interpretations of them according to Rosemary Noel, the founder of this system.

Each chakra possesses a specific energy. When they are spinning, your chakras are balanced. When they are blocked your physical, emotional and spiritual health are compromised. Blockages are caused by negative belief systems, fears, poor eating and exercise habits, negative imprint, illness, emotional upheaval, and etc. “With attention and understanding, we can control and influence our chakras. They can be developed like muscles, programmed like a computer, nurtured like a seed or closed like a book.”

In addition to the seven well-known chakras there are many secondary chakras, which also have great importance, including seven predominant chakras located within the head.

The functions of the following chakras from lowest to highest the 7 Main Head Shakta Tantra Chakras are explained in the manual. Also explained are two additional chakras: Bindu and Indu.

Prerequisite: You must be a Usui Reiki Master to attune others to Head Chakra Flushes.

Sent by chi ball only.