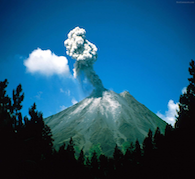 A volcano is an opening, or rupture in the surface or crust of the Earth or a planetary mass object, which allows hot lava, volcanic ash and gases to escape from the magma chamber below the surface.

On Earth, volcanoes are generally found where tectonic plates are diverging or converging. They can also form where there is stretching and thinning of the Earth’s crust in the interiors of plates.

The manual for this system includes extensive information and mythology about volcanoes, and discusses the Roman God, Vulcan for whom volcanoes were named after.

Volcano Reiki will help you with: