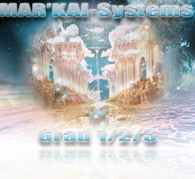 Mar’Kai Systems Levels 1, 2, 3 is a very High Frequency attunement.
Lady Solina received the following channeling: “Greetings, my lovely soul! I’m Adama, the High Priest of Light city TELOS. Some time ago I promised you to initiate you in one of the most high frequency healing system. Now it is time to give this system to people with higher consciousness. This system is called Mar’Kai which means “elemental force of the universe”. Colors of this energy are the colors of the rainbow, so in Lemuria this system was also called Rainbow Energy. It is one of the most respected and protected systems from the time of Lemuria. For people of the third dimension it will be a new energy, although it is an ancient system, which is passed now from our light empires to you.”

In this manual we read that Lemuria also has connections to Sirius and the Blue Flame.

“As Mar’Kai is a system based on “Technology” of modern times, it does not need any complex symbols. Simplicity, your intention and your divine power within you are enough to work with it after your initiation into the three degrees of MAR KAI – system.”

Adama is the High Priest — the spiritual leader in the sacred Lemurian city of Light called Telos beneath Mount Shasta, CA. He is the head of the Lemurian Council of Light in Telos. Also an ambassador and diplomat for Galactic contacts with our Star Brothers and Sisters, on behalf of humanity within and on the surface of the globe.

Adama, along with his Lemurian team are also in charge of the creation and maintenance of a very important crystalline grid around this planet. Adama is a Blue Ray ascended master of universal level, a master of Love and Compassion, assisting humanity and the planet with the ascension project. Adama embodies the ―Heart of Lemuria which is nothing less than the heart of love and compassion and the heart of the Divine Mother, the return of the Christ consciousness on this planet with all its wondrous magnificence.

Working with energy Mar’Kai is very simple, just your intention is enough. This energy has its own consciousness, it can’t be manipulated. This energy knows what to do, it finds its way.

During the three levels of attunements in Mar’Kai Systems you will receive initiation in a Big Crystal Temple. Three blue Lemurian crystals will be anchored in your third and fourth chakras. All of your bodies will be cleaned, blockages and the old information in the crystalline structures will be removed, your vibration will rise to as much as it would be appropriate for you, and you’ll get new knowledge. Your vibration will rise and your energy channel in Mar’Kai, which is about 20 cm from your Alpha Chakra, will be opened.