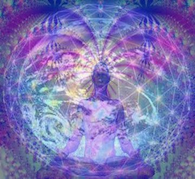 LEVEL 1
Humanity is now becoming aware of an extended system of Chakras beyond the first set of 7 chakras that have aided you well on your spiritual path and brought you to the place you are in now. There is also a yearning within that makes you feel that there is something more waiting to come through. The awareness of the extended system is the next step of spiritual evolution.

By the time you reach a point on your spiritual path where you feel able to work on the development of your higher chakras, you will have reached an understanding of how to tap into the energies of varying frequencies, not only to help your own spiritual progression but to also to heal Mother Earth. The idea that there are chakras higher than your crown chakra may be new to you. The purpose of these new chakras is to give you the ability to tap into your own inner god-self, the divine will and possible the galactic community that surrounds and supports the Earth and humankind on their spiritual evolution.

Each of the Celestial Chakras is a doorway, or a celestial gateway to various areas of the body, and is related to a Sub Chakra.

The Celestial Chakra Activation attunes you to the following:

11th Chakra: The Chakra of the “I AM” Presence
Sub Chakra 4 – Elemental Co Creator Chakra

This system attunes you to three more of the upper chakras.

The 13th Chakra: you will be taken to within to a place where the separation between the spiritual world and the physical world will be at its thinnest, greatly increasing your ability to see, feel and hear spirit. Your psychic senses may be dramatically increased.

The 14th Chakra: This is the energy center of Peace and Harmony. Activating this chakra also helps you to begin a process of connecting and aligning more closely with the energies of your Heart and Solar Plexus chakras. You will move deeper into relaxation and enter the elusive and mysterious Theta State, giving your mind permission to expand beyond the limited restraints of 3rd dimensional reality, helping you to increase your creativity, enhance your learning, reduce stress and awaken intuitive and extrasensory skills.

The 15th Chakra over time will become your personal portal where you can travel to other dimensional realities as well as to connect to a vast host of heavenly beings such as the Ascended Masters, Archangels, Guides, Elementals and other Galactic Masters who are coming forth at this time to help us with our spiritual evolution.

The Celestial Chakra Activation Level 3 is a continuation of the original Celestial Chakra Activations.  It focuses upon the expansion of Chakras 16 – 22.  This continued expansion helps you know and realize that you are a Galactic Being living an Earthly Life. Through these Spiritual Activations your Consciousness will continue to resonate with the Celestial Community of Light Beings who support Mother Earth during her Evolutionary journey towards Galactic Transformation and Ascension.

The 16th Chakra:  is associated with Spiritual Ascension and becoming a being of Universal Oneness. As you begin the Ascension process there is a possibility that the 16th Chakra will descend into the Crown Chakra. When this Chakra is activated you need to make the decision whether you are going to stay in your Physical existence or if you are going to move beyond time and space so that you can exist within a state of Dimensional Consciousness.

The 17th Chakra:  is associated with Universal Light and corresponds to your Dimensional LightBody and the Divine Feminine Vibrations of Consciousness. Activating this Chakra allows you to feel a true sense of Oneness with ALL THAT IS and ALL THAT WILL BE.

The 18th Chakra: corresponds to Divine Intention and the ability to gain access to Past Life Wisdom as well as your Galactic Self. Quite often at this level of Consciousness, you will act as an ambassador for Earth in the deliverance of Channeled messages from the Ascended Masters and our Star Brothers and Sisters.

The 19th Chakra: is connected with the Heart and the Christ Conscious Energy, also known as the Great Cosmic Heartbeat. By expanding your awareness into that of the Christ Consciousness you will be granted a new understanding of the Cosmic Energy and a total detachment from the things which no longer serve your life’s path or your highest good.

The 20th Chakra:  enters into your Awareness when you are ready to accept full responsibility as a Co-Ruler with the Divine. Until this point, part of you may wish to place God on a Pedestal outside of your Conscious Self, rather than recognizing the Wisdom, Power and Might of the God within. The 20th Chakra is also associated with Beingness and the need to Communicate in a more expanded way through the Vibrations of Light.

The 21st Chakra:  is connected to the Divine Cellular Structure and the Awakening of your Dimensional 3rd Eye. As you have a 3rd Eye that allows your Psychic abilities to manifest within the 3rd Dimension you will awaken the Divine Cellular Structure of the 5th Dimensional 3rd Eye which evolves into a Crystal Ball of the Seer, Sage, the one who knows ALL, Witnesses ALL and experiences ALL but makes no judgment. This is simply the place within you were Self Love and Self-Acceptance reigns.