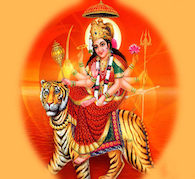 Goddess Durga is the mother of the universe and believed to be the power behind the work of creation, preservation and destruction of the world. The word “Durga” in Sanskrit means a fort, or a place which is difficult to overrun. Another meaning of “Durga” is “Durgatinashini” which literally translates into “the one who eliminates sufferings”. Thus, Hindus believe that Goddess Durga protects her devotees from the evils of the world and at the same time removes their miseries.

Goddess Durga incarnated as the united power of all divine beings, who offered her the required physical attributes and weapons to hill the demon “Mahishasur”. She has nine rays that manifested into nine Goddesses. Each has a different form and a special significance. They were believed to lift the divine spirit in us and fill us with renewed happiness.

Each manifestation ray of Goddess Durga represents a specific energy of Durga, which is often referred to as “Devi” (Goddess) or “Shakti” (energy or power) that works on creation, preservation and destruction, helping us with various life aspects.

This system consists of a sequel of activations that take 10 days to complete. Once you have activated each significance energy, it will be easier to use them with the problem or goal you have. They are sent during your attunement, and then you can activate each in the sequel on your own.