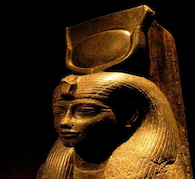 Hathor was generally pictured as a woman with cow’s horns with a solar disc between them, or as a beautiful woman with cow’s ears or a cow wearing the sun disk between her horns, or even as a lioness or a lion headed woman showing her destructive side.

As the Goddess of beauty and patron of the cosmetic arts she was often depicted on mirrors and cosmetic palettes. Yet she was not considered to be vain or shallow, rather she was assured of her own beauty and goodness and loved beautiful and good things.

She was known as the Mistress of Life, seen as the embodiment of joy, love, romance, perfume, dance, music and alcohol. Hathor was especially connected with the fragrance of myrrh incense.

Hathor was a patron of dancers and associated with percussive music. She was the incarnation of dance and sexuality. She was also known as Lady of the Limit who ruled over the known Universe. One of her main cult objects was the sistrum, a musical rattle. It was an instrument thought to have sexual overtones relating to fertility.

Hathor seen as a herald of imminent birth, when the amniotic sac breaks and floods its waters. She was also favored as a protector in the desert regions.